Can you tell which food item Cedric didn't appreciate, and politely separated (and didn't throw on the floor... YAY!) from the rest of the edible food? I guess string cheese isn't his thing! 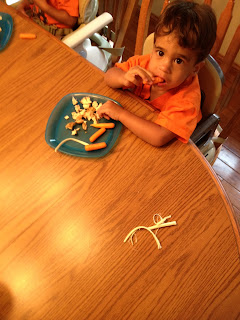 In other news, yesterday's post really wasn't me seeking affirmation about my parenting skills (although I feel embraced and affirmed by the people who responded to it). I was more or less trying to express feelings that I think many parents have. I hope I wasn't being a needy blogger!

Cheers to all!
Douglas
Posted by Douglas at 4:59 AM 3 comments:

One of my closest friends from high school and college is now a psychologist in the air force. He deals with all kinds of patients with many kinds of mental health issues. Due to his deployments and our living in India, we haven't seen each other in three years. In those three years a lot has happened (like the birth of our twins, and the birth of his daughter). So, we met up in Atlanta over the weekend.

More about the trip later.

For now, suffice it to say that every time I'm around other parents (and certainly around the children of a psychologist), I'm constantly watching them and asking myself, are we OK? 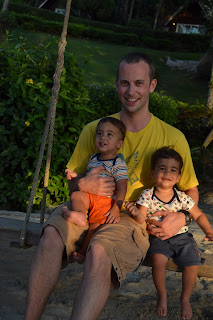 Yesterday, I made an appointment with the pediatrician, not because anything is wrong, just to check in and see if we're OK.

Today, I did a google search--my first mistake of the day--for 18-24 month developmental milestones. Yes, my kids are doing most of the things on "the list." But they're not doing all of them. Are we OK?

My sister's kids were around last week. Her son is two months older than my kids and about 10lbs heavier. He's a better eater, and says more words. Crap. I mean, I'm happy for her. But all of that only leads me to ask, are we OK?

Chad and I have often joked that we'd be EXCELLENT parents if we had a singleton instead of twins (any other parents of multiples know this feeling?). But we don't have one, we have two! Which, of course, leads to the question; are we OK?

And then there's pinterest and all of the parents that have time to enrich their children's lives with neat activities, and then have time to create how to's for the rest of us underachievers. Yikes. We may not be OK.

And, oh goodness, there's the fact that we're same sex parents, and I constantly feel like people are waiting for us to fail so they can say "I told you so!" Are we really OK?

I'm not panicky. In my own estimation of myself and Chad, I think we're pretty calm parents. But it is a daily task to stop asking whether or not we're OK and really focus on my interactions with my kids. And, I guess that is the point of this rather rant-like post. I want to spend more time in the moment with my kids, and less time worrying about whether or not we're OK.

Cedric loves to laugh! He's our ticklish cuddlebug. Earlier this week, we went to the park and played on the swings. I think he enjoyed it . . .

Yes, it's true, I've been MIA from blogworld. Beginning in the middle of April, I came down with a mysterious, India-induced illness. I am still recovering from symptoms that included persistent and recurring fever, stomach aches, body aches and a cough. Mostly, though, I was suffering from an extreme lack of energy and needed to focus all efforts on parenting and finishing the end of the school year. The silver lining of the whole experience is that I lost between 10 and 15 pounds.

The other thing that being sick has made me think about is whether or not it's finally time to leave India.  Chad and I have been in New Delhi for five years, and we will definitely be going back for a sixth year of work. Beyond that, we have no commitments. Is it time to leave?  Who knows?

Meanwhile, the boys are growing up right before our eyes. On June 4, we came back to the US for vacation, and during the first week that we were here Cedric and Ezra increased their vocabularies exponentially. They say so many words now. And, yes, they repeat everything. We've been enjoying time with our families.

I promise, now that I have some down time and am feeling better, to be a better blogger!  Here's a picture of my family on our farm in southern Ohio. 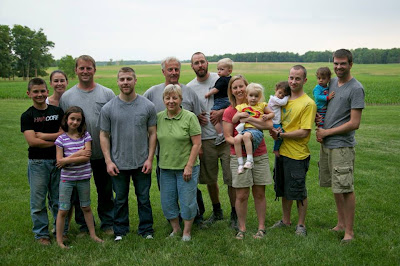 Doug and I made our last circle around Delhi today picking up some last minute items. We also stopped by the spa to treat ourselves to a massage, mani, and pedi! It is way too hot this time of year to be running around... but it was worth it.

We apologize in advance to anyone who forgets their headphones on the United flight to Newark tonight. Keep an eye out for a traveling circus... it will be us!

Both boys are having troubles with their teeth right now. Ezra and Cedric are sprouting teeth (6 and 4) respectively simultaneously. So it should be an interesting flight.