So, they both got a big visit from Mr. and Mrs. Claus. 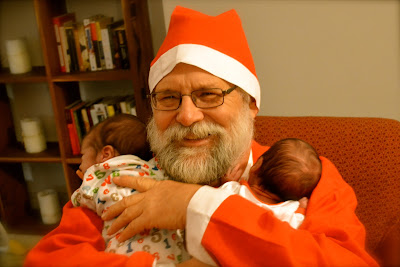 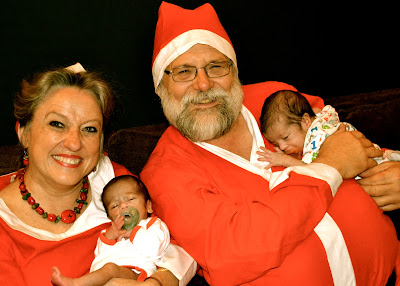 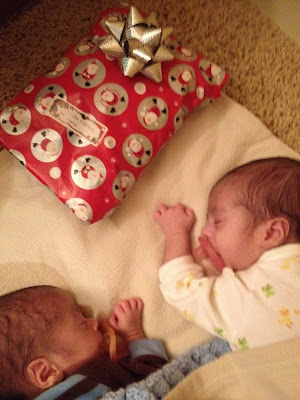 Cedric and Ezra are asleep in their pack and play, so I figured I'd take a moment to write about what a typical day in our household is like. I'll start at the beginning of the day. But, here's a spoiler alert: it's hard to determine exactly when the beginning of the day is because our days seem to keep rolling into each other.

For our six-week old twins, the days are broken up into three-hour cycles: 12, 3, 6 and 9AM and 12, 3, 6,   and 9 PM. I think that Cedric is ready to move to a four-hour cycle, but Ezra is not, so we are intentionally keeping them on the same schedule to maximize our sanity.

During the day we try to feed the kids and then have "awake time' right after the feeding. That means we'll do stretches, tummy time, diaper changes and staring at interesting things right after they eat. This works about 3 out of 4 feedings. The kids are getting more consistent with eating and then staying up to play as they grow. Ezra was born at a low birth weight, so feeding him regularly is the most important thing.

During nap times, we wash bottles, put in a load of laundry, stuff our wonderful g-diapers, or try to get other household chores done. Before I get much more into the play by play action, let me tell you a bit about our situation, so that you don't try to compare apples to oranges. As the subtitle of our blog says, we are a two-dad family. We live in India and work at a world-class school. Chad has been home with the twins since they were born, and in January he goes back to work. I get to stay home from January through the beginning of February. And, yes, we have full-time help (a nanny and a cook) who work during the days 6-days per week. So, we are able to get quite a bit done during the day, because there are usually three sets of hands at home at all times.

After the 6:00 feeding, we do a bath about every 3rd day. Then we put the babies in their cribs for the night at about 7:45PM. We have found that if we put them down after this that we miss the "window." and they have a hard time getting settled down. When they go down at 7:45, they sleep until 9 and go right back to sleep after. If they miss the window, they typically stay up until 9, and then are don't get settled until 10:30 or 11!

For the feedings during the day, we usually feed them at the same time, and then for the feedings during the night we feed them one-at-a-time so that only one of us has to get up. And for the night feeds we try not to keep them as calm as possible, and then put them right back to bed. This works most of the time. Every now and then we end up with fussy babies in the middle of the night, but not very often.

I can't stress to you how this schedule has saved our sanity for the first month of their lives! Our kids have thrived on their three-hour cycles and are typically very happy babies. Knowing that they need to eat at 12, 3, 6, and 9 twice a day has allowed us to physically and psychologically prepare for what needs to be done. For example, I know that I can go to bed right at 9:30PM, and then wake up for the 12AM feeding, get to bed at 1AM and then wake up and do the 6AM feeding before heading to work. This allows Chad to sleep until 3AM, and then sleep in until the kids need to eat again at 9AM. So, we're both tired, but we're not exhausted.

I hope that this doesn't seem too mechanical or robotic. Really, these last 6 weeks have been magical. Our routines have allowed us to get as much sleep as possible and have as much energy as we can to take care of each other and our babies. When people ask how we're going, I always say that we are having a great time because it is the honest truth! We love parenting our twins.

Happy Holidays,
Douglas
Posted by Douglas at 4:24 AM 8 comments:

This time last year we were lounging on the beaches of Bali thinking about starting the process of having children. I can't believe how much has changed since then. Thank you Bali for clearing our minds and sending us in this direction.

We have had a little something under our sleeves for about a month now. We couldn't discuss this on the blog or Facebook which has been really hard... until now. We are in America! We booked tickets right after the boys were born in hopes that we would have everything squared away in time. We went down to the wire, but we were able to fly home to surprise our families for the holidays. Everyone is totally shocked and happy that we came.

It turns out that Cedric and Ezra are made for travel. They were perfect little angels for the 15 hr flight, 2 hr layover, and another 2 hr flight. It was nice to have several of our friends/colleagues on our long flight and we were able to pass the boys around a little. The flight crew on Continental was amazing and made sure that we had everything we needed. They even washed our bottles mid-flight!

We are both really excited to be home for the holidays. It has been five years since we have been with family for Christmas. We will be splitting our time between my family in Indiana and Doug's family in Ohio. We also have plans to meet up with our friends for New Years.

Happy Holidays from our family to yours!

Here is an idea of how long you might have to spend in Delhi. Keeping in mind that DNA testing is not required for all cases and we got official passports and not temporary ones.

Today would be the day our surrogate would be at forty weeks. The doctors would never have let her go that long, but it is interesting to think about. I definitely would have pulled my hair out waiting for today. I can't remember what life was like without children. I know that sounds crazy since it has only been a few weeks, but it is how I truly feel.

Last night the lack of sleep and double melt down at three am was my test. It was the twins opportunity to complain about everything. We are hungry, you are too slow, our formula is getting cold, we are wet, we don't want you to change our diapers, we are cold, we are hot, give us pacifiers, we don't want that pacifier, Cedric wants to lay on his stomach, Ezra wants to be swaddled, we need to burp, you are doing it all wrong. You get the picture.

I gave it my three am best, and the babies are not holding a grudge today.

The passports have arrived! They were processed/printed in the states and arrived in Delhi six days later. So happy to have those in hand. The boys will have some embarrassing moments in passport control with these mug shots. Next stop MHA/FRRO.

Most of you probably do not know that I was in a movie with Julia Roberts.

Alright, that might be overstating my role a bit. But, it is true. When the cast and crew of Eat, Pray, Love was in India filming for the Indian portion of the book, some of the teachers at my school were recruited to join in as extras for the crowd scenes. So, during the Connecticut wedding scene in the movie (which was, oddly enough, filmed in Delhi), you can see me for a few brief seconds.

Tomorrow, Cedric and Ezra will be three weeks old and life has been as great as a movie. Although, it is a movie of a different title all together.  Do you see where this is going? So, without writing a novel, I will give you a bit of a description about the three most important things in our boys lives right now. Eat, poop and sleep!

Eat: The biggest thing in our lives right now is bottle feeding. With late-term preemies (ours were born at 36w3d), being on a feeding schedule is mandatory. When they first came home from the hospital, Ezra was on a two-hour feeding cycle, which did NOT work for him at all. He was so tired after his 30 minute feeds that he would not be able to eat for the next feed and his intake kept getting lower and lower. So, we changed him over to a three hour cycle and he started consuming more formula at every bottle. Cedric is our little alarm clock. He usually wakes up hungry within 10 minutes (before, or after if we're running a bit late) of the three hour mark. He is quite prodigious at letting the world know when he is hungry.

Poop: As soon as our boys got home from the hospital, we switched to cloth diapers. Our reasons for doing this are economical, medical and environmental. Economically, diapers are quite expensive here in India, and diapers for small babies (4-8 lbs) are not available. So, when were in the US in the summer, we stocked up on G-Diapers, which is an initial investment of about $250. But, they will probably paid for themselves by the time our boys are 8 weeks old. The environmental impact of using diapers is huge, and especially in India, where proper waste disposal doesn't happen, we wanted to live our beliefs about the environment. Using cloth diapers has been a lot of fun (yep, I said fun), and it has worked REALLY well for our boys. We also have been using this recipe to make our own wipes with the hypo-allergenic baby soap we use for bath time. You won't be finding any trace of diaper rash on our C or E's little bums!

Sleep: Being on a three-hour feeding cycle really dictates the sleeping schedule. Our boys eat at 3-6-9-12 AM/PM.  During the daytime hours, we change nappies and enjoy finding things to stare at and do stretches and try to stay awake for as long as possible after feedings during the day. Then, the boys fall asleep until the next feeding. At night, both boys are bout 85% at eating and then going right back to sleep. Having this kind of schedule has been such a major help to us as parents. We know when we're going to need to get up in the night and we can make a plan (Douglas at 12 AM and 6 AM, Chad at 3 AM, or vice-versa). The schedule has made our babies very happy, and has made me be able to go back to work this week and not feel like a walking zombie!

Beyond all the eating, pooping and sleeping, there is a whole lot of love going on at our house. We love cuddling and playing with the boys (as much as they can "play"). Also, our friends and colleagues have surrounded us with a big blanket of love and we feel so supported as new parents. We are so thankful for these last 20 days.

Much love to everyone!
Douglas
Posted by Douglas at 11:26 AM 3 comments: