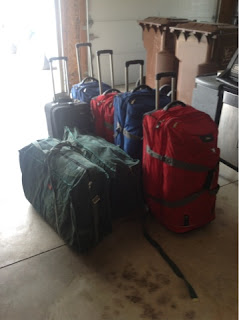 We're back in Delhi. And what a trip it was! It's good to get back in the swing of things and to be in our own place.

The plane ride was about what I expected it to be. The boys did awesome on the first leg of the trip, and then we used the family room in the United Club for our long layover (it pays to be Premier Access Gold Members). It was great! We had a private room, two couches and a TV. Cedric napped and Ezra played.

Cedric was definitely not himself at all yesterday. Of course, I took the thermometer out of our diaper bag (we've never used it during a flight before, so no need to keep it in the diaper bag, right? WRONG!). So, I'm not sure how high his fever got during the flight, but I'm pretty sure it was up there. He slept or laid down for the entire Delhi flight. Ezra, however, made up for his brother's lack of energy especially during the last four hours of the flight. Wowsa! He got so frustrated towards the end that he cried for about 20 minutes (seemed like 2 hours) because he couldn't get down and run around the aisles. Then he finally fell asleep again as we landed. Chad assures me that it wasn't as bad as I thought it was. Still, it stunk pretty bad. I hope that this was the worst of it and that when they're 2 1/2 they'll be able to understand a bit better why they can't be free range on the plane. Maybe I'm fooling myself.

We got in at 8 and were out of the airport by 9 with three trolleys of luggage plus two strollers and diaper bags. Arjun, one of the school drivers, was waiting for us outside with the van near by. So, we loaded up and headed for home.

The boys were shell shocked by then, but Ezra was really happy to see Jyoti and kept running around trying to give her a hug. What a happy labrador. It looks like she did a lot of comfort eating while we were gone as she's a bit thick around the middle. Cedric, meanwhile, wasn't having any of it, happy lab or no!

We sorted a few things out and then had the boys in bed by 10:30. At that time Cedric's temperature was about 101. I'm pretty sure it had been higher than that during the flight. The boys went down without any fuss at all. World-weary travelers.

After they went to bed, we sat down for a few minutes, but then got up and hauled all the luggage (8 bags, 2 strollers and a carry-on) up two flights of stairs. I opened a few pieces of luggage, but only the essentials in order for us to go to bed and get started again the next morning. Sleep came fast, but was not long-lasting. The boys woke up in a fit at about 1:00 AM. Fortunately, they only needed bottles and went right back to bed until 3:30 when they woke up again. I fed them breakfast and they played. They were in great moods and Cedric's fever had vanished. At about 6:00, their wheels started to fall off and so they had another bottle and went back to bed for what I thought would be a two- or three-hour nap. No sir. They slept from 6:30 AM until I woke them up at 1:00 PM. Jet lag is a nasty beast. While they were sleeping I unpacked our luggage. It's good to have that done and out of the way.

Chad went to work at 8:00 and Sheela had came in at 8:30, so I took the opportunity to take a nap myself. I slept until about 10. Then I got back to work organizing what I had unpacked. Chad and I had lunch with some of the returning faculty. It was nice to see our friends. We'll be doing a lot of "Remind me what your plans were this summer..." over the next week. Familiar, and mostly jet-lagged, faces are slowly starting to reappear. New faculty has been here for about three days. I don't officially start back until Tuesday.

They boys and Sheela (our housekeeper and nanny) have been getting reacquainted today. Vineet (the dog walker) came in this morning while they were asleep and was visibly devastated when I told him that the boys were asleep. He missed them so much over the summer. He came back this afternoon and he's now playing with them. I think Cedric is getting tired again. I'm not sure what the rest of the day will bring for him. I think that he might need a nap. This is going to be an interesting evening. Pretty sure they'll be wide awake when Chad and I are dragging to a halt and begging to go to bed.

The boys have been asking about Grandma and Grandpa and Meme and Papaw. We'll need to skype soon.

Love you!
Douglas
Posted by Douglas at 8:20 PM 2 comments: