As I write, the music students with whom I am traveling are reflecting on their week: the things they've heard, seen, experienced and thought. So, I thought I'd take a moment to reflect on this impromptu trip to Brussels, and coming back to Europe. Ever since living in France for a year when I was 15, I've often contemplated where I wanted to live in the world, never coming to any firm conclusions, and certainly never thinking that living in India would be a possibility. Maybe I'm destined to be a world wanderer. I sure hope Chad doesn't mind!

Now that we are so close to having our own children with us, I think about it even more. Is India the place where we want to stay? We live in such a great community, have wonderful friends, have an excellent support system, live more comfortably than we would almost anywhere else in the world. But, the flip side to that list has many detractors that make me want to pack up our babies and go. Traveling to Europe always makes me want to move there... that is until I talk to the music teacher from Luxembourg, who told me that a one-bedroom apartment there costs upwards of $300,000. Yikes!

Then, there is the difficulty of being so far from our families. That weighs into the decision about where to live as well.

But, as I think about this very worldly group of students, and their experiences living all over the world, I think of the immense learning opportunities they've had, and also how they must have had to depend on their families throughout every move, adjustment and transition. On Wednesday evening, when I left Delhi, I was staying with 16 juniors and seniors in high school who were saying goodbye to their parents. I have to say that the affection they showed their parents was surprising. More than a few 17-year-old boys unabashedly initiated public displays of affection with their moms and dads. You can tell that among many expat families, the bond between parent and child is strong. And, the child ends up having a strong sense of independence and self.

So, now, I'm going to put my teacher hat on and have us play a familial game of Where's Waldo. If work and money were no option, where would you choose to raise your children? Why? 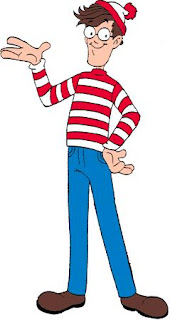