There It Was, As Plain As Day

We are officially off the road after 23 days. We moved into our own (temporary) place in downtown Indianapolis. We have had a great time with family in France, Indiana, and Ohio, but the condo we rented is right next to everything and perfect for our family.

A funny thing happened at lunch today. The boys were having a good time playing in their seats and people watching. I noticed that Cedric had separated a few of the linking letters and dropped a few on the floor. When I handed the letters back, I noticed this word. What are the chances? We all had a good laugh, but I hope not too many people noticed this word swinging in the air. They might take our parenting license away! 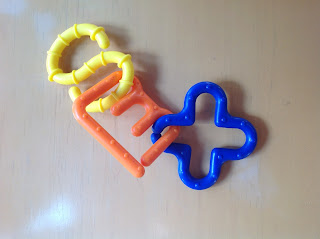 . . . Until you can't ride any more. In my case, that moment came today when I sold my wheels. I started riding about six years ago, and have enjoyed taking long rides in the country and going motorcycle camping. When I was in Ohio visiting my family, my older brother (also a former motorcycle rider and now a father of two) gave me hell about still having a bike with two young kids at home, and Chad has been pressuring me since, well, forever, to sell it. So today, my two-wheeled baby pulled away for the last time. I guess it's time to be a responsible adult. 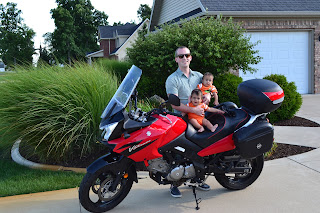 Keep the rubber side down, friends!

So, the boys have been transitioning to solid food. Their first experience with really runny rice cereal happened in Delhi. We started with rice cereal because it's readily available in Delhi, and easy on the digestive system, plus, it allows the kids to practice taking food from a spoon and swallowing, which took some work.

Then, when we went to France, our dear host Françoise had already purchased several "petits pots" (read baby food in a jar, but it sounds so much better and more sophisticated in French), and so we started the boys with artichokes. Cedric loved the artichokes, but Ezra was not impressed. So, we tried him on carrots and sweet potatoes, which he liked, but then the next day his skin broke out in a rash (more about that in a later post), so we got him off of carrots. Then, when we went to the US we tried more sweet potatoes, peas, green beans and squash before trying fruits (bananas, peaches and pears). Both boys are great eaters, with the exception of Ezra's aforementioned dislike of artichokes and Cedric's dislike of peas. Everything has been going well. They are taking bigger spoonfuls, and not pushing the food out of their mouths. 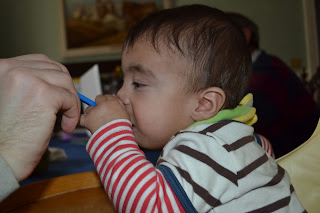 But, here's my problem. I had the best of intentions to use only homemade puree with organic vegetables raised by Norwegian bachelor farmers (so their pure, mostly, right?); but with our busy travel schedule, and being away from my own kitchen, I've resorted to buying the baby food in the jars. We purchased about 10 packs of Gerber organic food. The following is a list of the ingredients in the organic pears:
Ingredients
ORGANIC PEARS, WATER, TUNA OIL (SOURCE OF DHA), ASCORBIC ACID (VITAMIN C), GELATIN, CHOLINE BITARTRATE, ALPHA TOCOPHERYL ACETATE (VITAMIN E)
Here is a list of the ingredients in the non-organic pears:
Ingredients
PEARS, PEAR PUREE (WATER, PEAR PUREE CONCENTRATE), ASCORBIC ACID (VITAMIN C), CITRIC ACID
You see the problem? Why does the organic type contain more additives than the non-organic type? Anybody have any insight on this one?
Posted by Chad at 8:46 AM 5 comments:

Chad and I spent our first fathers' day as actual fathers flying to a conference for work. This is the first time we've left the boys, and it feels odd. I'm sure I'll have more to say about that later. While we were on the plane, I took a some time to put together this video of our recent trip to France, where the boys tried "real food" for the first time and we all did some sightseeing and spent time with wonderful friends. Enjoy!

Across the Globe Travel: France

Believe it or not we are still on the road... technically.

We left India early in the morning June 2 from our apartment for our flight from Indira Ghandi International Airport. Check in was easy with only a few nosey airline employees. We found that politely saying "Don't ask questions like that you are being rude" stopped people in their tracks. Passport control was a breeze compared to our first time, and we didn't get the "are you smuggling babies" treatment. 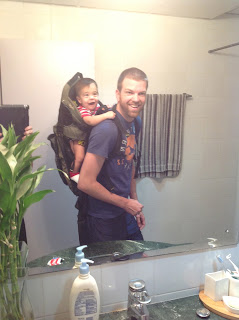 We flew Turkish Airlines to Paris by way of Istanbul and the airline was very accommodating. We had two bassinets on the first leg which everyone enjoyed. Then on the second leg, we had an empty seat between us. At almost seven months, our kids are proficient at sitting up in a chair with only a little support, so having an extra chair was nice. We were allowed to board the plane first with the twins, and the flight attendants on both flights came to meet the babies as soon as we were settled. They offered to help in any way they could, and the flight was smooth sailing.

For those of you who are traveling to India several times in a year, you might want to consider signing up for a credit card like (The United Presidential Plus Card by Chase) the one we have (1) has no foreign transaction fee, (2) allows you extra baggage, (3) allows for free upgrades when available when flying domestically and (4) allows access to the travel lounges in all major airports. During our layover in Istanbul we found the Star Alliance lounge and enjoyed the escape from the busy terminal. Seriously, this made our trip a breeze. In four hours our membership more than paid for itself and I never plan to leave home without my access card again. The lounge had really nice (immaculately clean) changing rooms and napping rooms for the boys, and a self service bar for the adults. We couldn't have asked for a better place to stretch out and regroup. 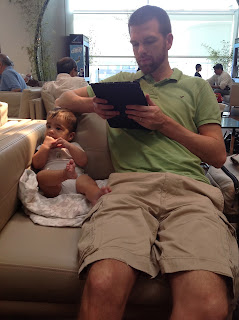 The boys did great the entire journey and only raised their voices in protest when we get into the rental car and headed for the hotel in Paris. It was Doug's first time to drive in Paris, so screaming babies didn't exactly make it very much fun. Driving in Paris was probably the most stressful time of our trip.

The next morning, we drove from Paris to Vichy, where we spent four great days. The town is beautiful and has wonderful parks for walking. It was nice to meet Doug's French family and everyone was wonderfully welcoming and went out of their way to make us feel at home.  I don't speak a word of French so I remained quiet during dinner while Doug and everyone chatted away. The food was great and no one made me eat snails.

Every place we stopped in France had a wonderful changing room. America could take a lesson in accommodating parents. Each of the changing rooms had a little toilet, changing table, and an adult toilet. The roads in France were also very nice. Living in India has made me appreciate a smooth ride. I didn't care too much for paying the $50 toll, but the roads were as smooth as, well, a baby's bum.

We were originally scheduled to fly United from Paris to Chicago, but do to a 21 hour delay (no, that wasn't a typo) we rebooked and re-routed through Newark. This was the first international flight I've been on where the flight attendants didn't care about the babies, offered no help ("sorry, we aren't allowed to rinse your bottles out") and ("do you think the babies will sleep most of the flight?") really just wanted to get through the flight.  It's not that they were rude (ok, maybe they were a little rude), they were just completely inattentive. So, other than the cranky flight attendants (you can always tell when it is a Newark based crew) the flight was fine. It was the smallest plane we have flown internationally, but it did the job.

Again, the United lounge at Newark was a nice place to relax and refresh during our layover. Once more our club membership paid for itself. We went to the gate right before our flight and we were thankful we didn't have to spend much time there.

We were in Indiana over the weekend. Now we are in Ohio visiting Doug's family. It has been great to see everyone. The boys are loving the attention and the grandparents are over the moon to hold the twins. We have received compliments from complete strangers on how well the twins travel so cheers to a good trip thus far.