The boys are almost eight months old, and we went to the doctor in America for the first time. Everything is going great, and the boys are growing bigger and bigger. Here are some highlights:

Ezra has two teeth and is starting to crawl. Others who meet him often remark how athletic he is. He has very muscular legs and loves to move about. He smiles often. He's no longer stoically silent twin, as he has found his voice in the last couple of weeks; although he's still not quite as talkative as his brother. He is eating two "real food" (read baby food puree) meals per day and loves all of the food we've tried except for sweet potatoes. He is still our petit homme but has added on almost two pounds since we left India and now weighs 13 lbs, 6 oz and he is 25.7 inches long. Despite the severe weight discrepancy between Ez and his brother, the doctor is not concerned as he is growing at a normal rate. He's had some eczema patches on his skin since the beginning of June (which will be the subject of another post), but those have been kept under control with lotions and emollients. He loves to go hunting for his brother's pacifier and use it as a teething toy. 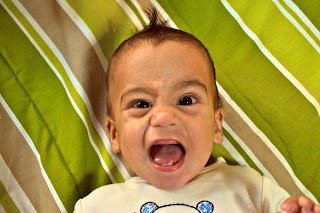 Cedric loves to roll on the floor and uses his hands to turn in a complete circle while on his belly with remarkable agility and quickness. None of his teeth have broken through, but he has two that are waiting just below the surface of his gums. In the last week, he has become an expert at sitting up on the floor unassisted and is becoming very proficient at holding his own bottle and feeding himself. He loves to swim and go under the water. He is still our big boy and weighs 16 lbs 15 oz.He is 27.5 inches long. He follows conversations that are going on in the room and really loves being around people. He has a severe addiction to his pacifier when tired and falling asleep (way to go, Dads!). He loves to eat and gets very excited when he sees his food. He's loved everything that he's tried except for peas. 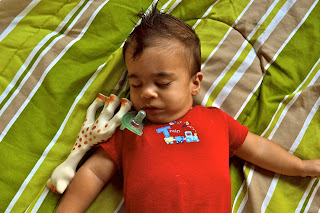