We've been enjoying roaming around the various playgrounds and the markets right near our apartment. On day six, we got a little more adventurous and took a walk to the Prague Castle. The walk there was brisk as it was early in the morning. There weren't many pedestrians out on the street. Nyssa helped us find our way through the windy corridors once we crossed over the Vltava. The map, however, was not our friend, as it turned out that our chosen path included about 22 sets of stairs. We formed a team with Chad and Nyssa taking both strollers at the back and me picking both up at the front and we climbed the stairs one by one, much to the amusement of the people strolling leisurely down in the opposite direction. Once we reached the summit, we enjoyed some breathtaking views of the city covered in the mists of the morning air. It was truly refreshing to see actual fog that isn't laced in pollution... Ah, Delhi! I will not miss your sketchy air quality! 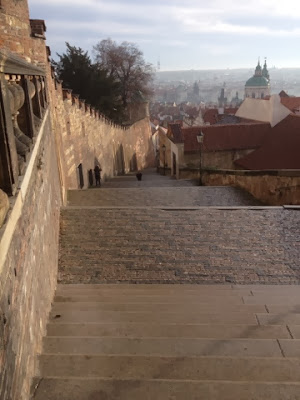 After seeing a quick guard changing ceremony at the government buildings, our tour commenced. We visited the Old Palace, a 12th century Romanesque church that had been beautifully restored, and a quaint row of houses where smithies and bars from days gone by were preserved to give us a taste of what Prague must have been like long ago. Finally, we went to the Cathedral and marveled at the beautiful stained glass. The boys took it all in from the comfort of their strollers. We stopped a few times to let them stretch their legs and push their own strollers around. All in all, they were perfectly behaved little tourist-gentlemen.

Until all hell broke loose. During the last few minutes of the last stop on our tour, Cedric decided he had had enough stroller time and wanted to be carried. Since we'd pushed our luck and had kept the boys out past their nap time, I carried him for as long as I could. But , at the end of the first mile on our two-mile walk back to our apartment, my arms had had enough, and--much to his dismay--I put him back in his stroller. Yikes! He screamed all the way back to our hotel while we quickly rushed down streets and through squares. I've never pushed a stroller so quickly in my life.

Finally back at the apartment, we quickly got them changed and put down for a nap. They slept for three and a half hours. Poor little guys were tuckered out from a morning of strolling and sight seeing.

The evening was spent playing around the apartment, eating dinner, and then going for a stroll on the square to see the evening Christmas events. There was a very interesting Czech folk band that played on the main stage as we walked. We ate a few more helpings of trdlo, the sweet bread that is gently rolled over the fire and coated with sweet cinnamon and sugar. A few more glasses of mulled wine and some cold beers were also enjoyed by the adults. 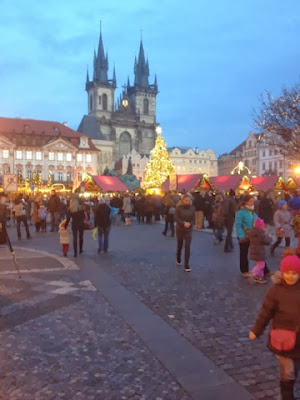 Back at our apartment, we Skyped with my family who was having their Christmas celebrations on the 26th instead of the 25th. It was nice to see everyone opening the presents we bought and sent. Internet shopping finally made manifest. And, sadly, we said goodbye to Nyssa. She was flying early the next morning to Berlin to see family. We've so enjoyed having her on the trip and the twins LOVE their Aunt Nyssa time.

One more full day is all we have left in Prague. This vacation is flying by. Hopefully the pounds of food we've eaten will fly off of our waistlines just as quickly once we return to Delhi.

Love and Peace,
Douglas
Posted by Chad at 9:02 PM